There is a common misconception that when children reach a certain age, they can then decide for themselves as to which parent they want to live with. The reality is that the Family Law Act does not prescribe a certain age at which children have the autonomy to make decisions in relation to the live with and spend time with arrangements with their parents.

Is the age of your child a factor considered by the Family Court?

Is your childrens wishes a primary consideration in Family Law?

Can my child have an independent evaluation for parenting arrangements?

The Court can be assisted by an independent evaluation of the child by way of a court child expert, who will meet with your child and provide a report to the court as to your child’s understanding of the current parenting arrangements, based on their assessed maturity level and capacity to make decisions. The appointment of an Independent Children’s Lawyer who meets with the children can also assist in providing an independent view of what is in the child’s best interests.

The primary judge relied heavily on the Family Report dated 27 May 2019. The elder child told the family report writer, “I want to live with my mother and see my dad on some weekends and some of the holidays. I don’t want to be separated from my sister”. The younger child, on the other hand, said that she would like to live with the father but did not want the mother to get upset with her for choosing him.

In the family report writer’s conclusion, she returned to the differing wishes of the children and opined that “[t]his poses a significant dilemma for the [children] in that it is a priority for them to remain living together in one household.”

It was made quite clear by the family report writer that she considered it most undesirable for the children to be separated.

The family report writer also explained her concerns as follows:

“Pseudo-maturity in an intelligent 15-year-old is often mistaken for the capacity to make good choices, after taking into consideration all possible consequences, both short-term and long-term, when in fact the young person is ill-equipped to make decisions that are best left up to the adults in her life who love and care for her. As pointed out by the mother in paragraph 12 of her Affidavit, filed 13 May 2019, [the elder child] is still only 15 years of age and needs guidance.”

The [family report writer] goes on to caution the Court against placing too much weight on the children’s expressed wishes particularly the [elder child] who she says is: ‘far less resilient that [the younger child] and is less able to cope with the loyalty demands that appear to be [sic] being placed upon her by the mother.’

“When deciding how much weight to place on each child’s wishes, it will be important to consider the impact that the parental conflict has been having on the emotional and psychological well-being of the children. [The elder child’s] decision to limit the amount of time she spends with her father may attributable to her being a teenager; however her presentation and behaviour during the interviews suggest that she is far less resilient than [the younger child] and is less able to cope with the loyalty demands that appear to be being placed upon her by the mother. [The elder child’s] alignment with the mother, whilst currently being used as a means of protecting her psychological wellbeing, may well evolve into her rejecting her father over time, should the parental conflict continue. This would have long reaching consequences for her emotional and psychological development and well-being”.

The appellate judge noted that clearly, the primary judge did not fail to have regard to the children’s views because, as the above paragraphs show, they were expressly considered. However, the primary judge was cautious as to the weight to be given to them, especially those of the elder child because of the influence of the mother on her.

The mother’s submissions are that as a 16-year-old young adult, the elder child should be entitled to choose her own parenting arrangements. Whilst there is some force in that proposition, the weight to be given to the child’s views depends on the maturity of the child expressing them and the circumstances in which they find themselves. However, as already discussed, the family report writer advised, and the primary judge accepted, that in this matter the elder child’s views should be approached with some caution.

The mother’s submissions, if accepted, would entirely override the younger child’s preference to live with the father because there was no suggestion, in this case, that the children live in separate households. That was the children’s greatest concern and the family report writer advised strongly against it. Why then, should the elder child’s views be accorded determinative weight over the younger child’s?

As her Honour’s reasons for judgment make clear, the children’s views were not the only matter taken into consideration by the primary judge. What particularly weighed in the balance was the primary judge’s view that the present arrangement was not working and was leading the children to be stressed and unhappy and that if the children lived with the mother their relationship with the father “will be further eroded and eventually lost”.

The appellate judge found that the primary judge did give necessary consideration to these issues. As s 60CC(3)(a) of the Act and Bondelmonte v Bondelmonte (2016) 259 CLR 662; [2017] HCA 8 at 675 make clear, the Court may consider any matter it thinks relevant, which bears on the weight to be given to the children’s views. This is what the primary judge did. The appellate judge was of the opinion that this ground (and the balance for the grounds that formed the basis of the appeal) had not been made out, and the appeal was dismissed.

It can be difficult for parents when children are telling them, for apparently valid reasons, that they want to change their arrangements. It is important to never act unilaterally on this. If possible (and safe) to do so, open dialogue with the other parent about the issue. If you cannot resolve the issue, then seek advice from a specialist family lawyer as early as possible. 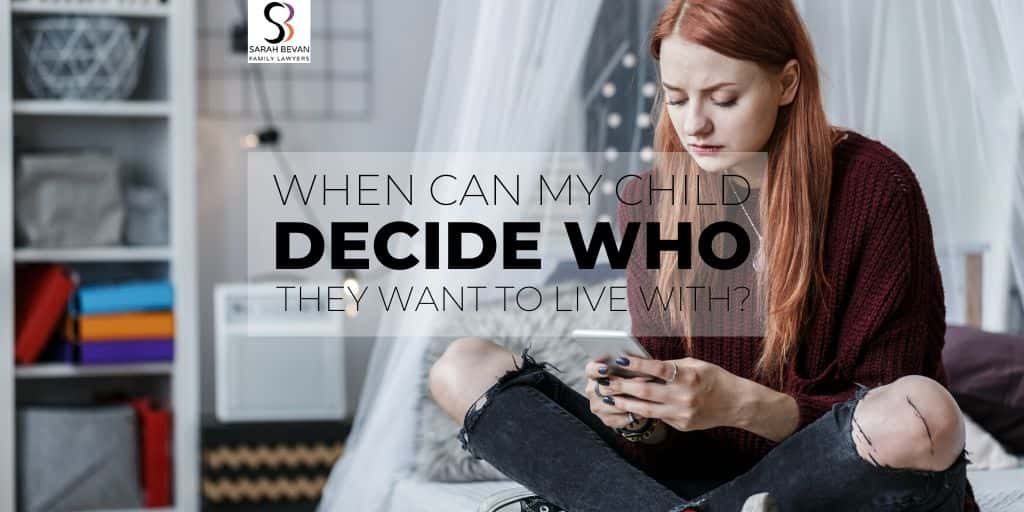