When should we apply for a Prenuptial or Binding Financial Agreement?

When should we apply for a Prenuptial or Binding Financial Agreement? 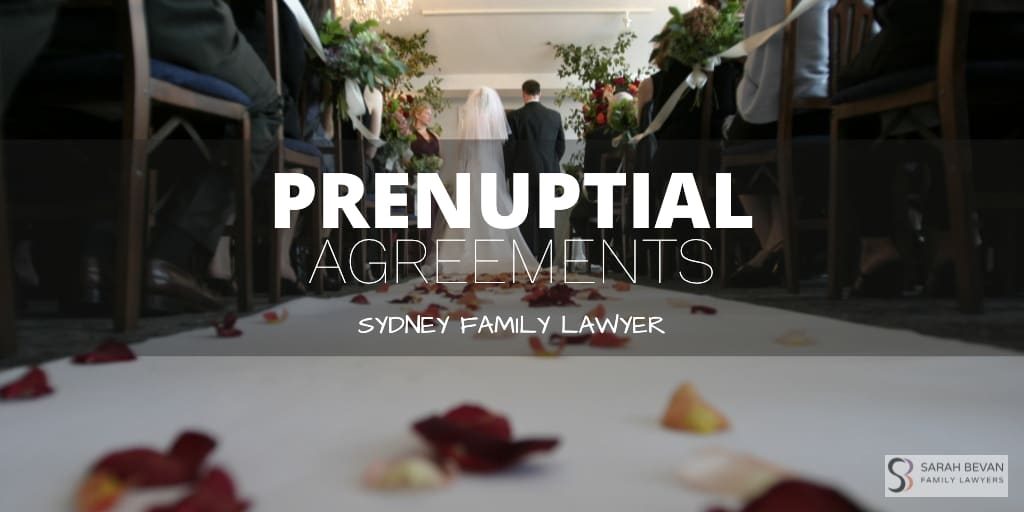 Certification (Legal Statement) of Binding Financial Agreement (Prenup) services, do we each need a separate lawyer?

We’ve discussed this a lot, Prenuptial Agreements.  However, let’s expand upon this to discuss as it is important and gets asked a lot.

A pre-nuptial agreement is a common phrase used for a financial agreement before marriage.  It is entered into by two people prior to marriage to determine how their property and financial resources are to be divided in the event that their relationship breaks down, and without having to recourse through protracted and costly litigation.  As it is a legal “contract” between two parties, there are strict criteria under the Family Law Act 1975 that needs to be met so that these agreements are binding and they cannot be challenged in future.  It must be noted that albeit the intention of these agreements to be binding the legislation also makes provision for the Courts to review if the agreement that you entered into is deemed non-compliant.

A binding agreement does not stop a spouse from challenging the agreement.  There are limited grounds to setting aside a binding financial agreement.  These are contained under s90k of the Family Law Act 1975.

This section states that a Court may set aside a financial agreement if the Court is satisfied that:

As the Court’s power to set aside the agreement is ultimately a discretionary power it is important that the agreement is drafted in a precise manner which addresses all the issues raised above. Therefore significant time and effort must go into drafting a Financial Agreement to cover all disclosure obligations and to also address any future contingencies that may occur. Every Financial Agreement that a lawyer drafts must be unique and as such cannot be completed without significant input from the parties entering into the agreement. It is integral that several drafts are circulated prior to the signing of the final document and that the parties and their independent legal representatives have a meeting of the minds in order to create the instrument. This will protect the agreement from being set aside for such things as non-disclosure of assets, or for non-anticipation of a future contingency that is not purported in the agreement.

If you are considering entering into a prenuptial agreement there needs to be forward planning and ample time to prepare. As these require significant due diligence by legal representatives, there should be an expectation that the drafting process takes a few months to complete. This should assure you that the agreement that you are investing upon will provide the appropriate insurance to protect you in future.

Often times parties consider entering in a prenuptial agreement and seek legal advice regarding doing so only a few weeks prior to the wedding. This should be avoided at all costs. If the date is set and the wedding invites have been circulated, then asking your future spouse to enter into a prenuptial agreement could be considered unconscionable. By this stage, it is assumed that significant time and money has been expended into the planning of the wedding. Your future spouse may feel pressured to enter into the agreement so as not to cancel the wedding.  This could be construed as unconscionable conduct, if a party enters into an agreement under duress. It would, therefore, be more prudent to discuss the agreement before any plans have been formalised.

It is important to note that if it is your and your spouses’ mutual intention to enter into a Financial Agreement, you still have the ability to do so after you are married. The Family Law Act 1975 makes provision for parties to enter into a Financial Agreement during the relationship.  Should you both agree to enter into this form of an agreement after you are married then you eliminate the issue that one party placed pressure on the other to sign.

If you are interested in discussing or entering a prenuptial agreement, then please do not hesitate to contact our office. Our Senior Lawyers specialise in Family Law and will work with you in drafting these agreements so that they protect your assets and resources from future challenges and claims.