The following is an article as published on Legalwise.com.au, on May 2nd, 2019. 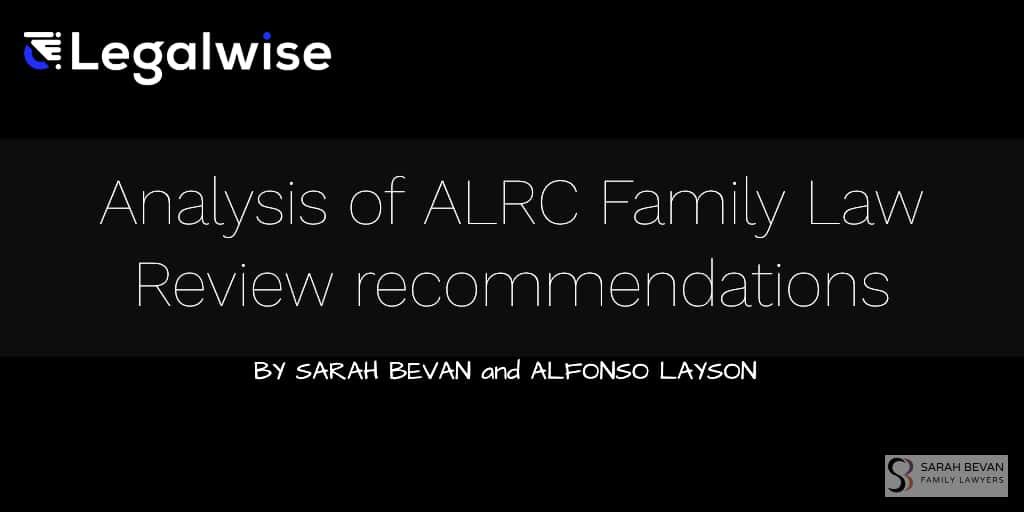 Sarah Bevan and Alfonso Layson of Sarah Bevan Family Lawyers discuss the long-awaited report from the Australian Law Reform Commission Review of the Family Law System and ask: Does it live up to the expectations of the public and legal profession and, are there any positive recommendations to remedy the issues of the much-maligned and underfunded family law system?

On 9 May 2017, the Turnbull Government spearheaded an initiative to direct the ALRC to conduct its first comprehensive review of the much-maligned family law system. This was in direct response to criticism surrounding the delays within the family law system, the increasing costs to litigants and the lack of physical and financial resources available within the Family Law Courts. The report was completed on 31 March 2019 and was released to the public a week after the crossbench voted against debating the Bill, which had passed the Lower House.

Recommendations of the Report

In simplistic terms the recommendations contained in the report were broken into the following subcategories:

There were 60 recommendations made across these subcategories that ranged from the redrafting of legislation to mandating certain actions of potential litigants. The report ultimately recommended that a singular Court system would be the idealistic but not an immediate solution.

Possible effects of Implementing the recommendations

Perhaps the costliest of all the recommendations is the abolition of the Federal Family Courts with the Australian government to consider options to establish State and Territory Family courts in all jurisdictions. From a practical perspective, it is difficult to understand how this recommendation would lead to cases being run more efficiently. Merely one consideration is that Australians are typically mobile, and State borders mean little on a practical basis. So for families who cross jurisdictional borders, their cases may well be subject to unnecessary complication, and potentially cost and delay.

Further, family law demands specialised Judges with specialised skill, experience and training. Unless there are to be such Judges appointed to the State Courts, then families will inevitably suffer.

One of the recommendations relates to amending Section 61DA, by replacing the presumption of equal shared parental responsibility with a presumption of joint decision making on long term issues.

There is little doubt that Part VII of the Act, relating to children, is complicated and lengthy, particularly after the 2006 amendments. For example, even many lawyers are unaware of the difference of the presumption not applying due to family violence versus it being rebutted if in the children’s best interests. Most self-represented litigants simply have no grasp at all of this concept.

Therefore simplifying the language is potentially very positive. But care is needed in such redrafting to ensure that any changes do not give parents an additional reason or excuse to fight for primary care in the belief that such primary care will mean they have greater say in decision making. Care is also needed to ensure that appropriate protection is given to those parents in a family violence situation, as being forced into ongoing joint decision making can be a means of one parent attempting to control or coerce the other parents on a long term basis.

Probably the most controversial recommendations are that a presumption should be applied that superannuation accrued during the relationship is to be split evenly post-separation and that contributions during the relationship should be considered equal. Care must be taken when suggesting that an equal division is a go-to position in property matters. It is a considerable strength of our current system that it is responsive to each family’s unique circumstances and that it takes into consideration various types of contributions. Applying this presumption could mean that many people have their significant contributions overlooked, and effectively undervalued. It would certainly make the process easier for lay people to understand, but this should not be at the expense of proper consideration of unique circumstances.

The overarching findings of the report suggest that simplification of the family law system is the way forward, and for it to be accessible to litigants at State level. The problem which remains is that as Australian society and the structure of families evolve and become more complicated, so too does the complexity of family law increase. An established specialist Court system is needed to deal with the changes that our society faces. While it is always important to consider how law and processes can be changed to meet the needs of Australian society, funding of the system must also keep pace with the increased demand on the system.

Sarah Bevan was admitted as a lawyer in New South Wales in 1999.  She established Sarah Bevan Family Lawyers in 2002, which has grown significantly from the sole practitioner firm that it was initially. Sarah has always practised exclusively in all aspects of family law, including niche areas such as surrogacy, complex international matters, and providing expert evidence for overseas jurisdictions in Hague Convention matters. Sarah obtained her Family Law Specialist Accreditation in 2005 and was accredited as an Arbitrator in 2008.  In 2007, Sarah undertook Collaborative law practice training to provide her clients with alternative dispute resolution processes and encourage effective settlement negotiations.  She is also a member of the Law Society of NSW, Family Law Section of the Law Council of Australia, AIFLAM, Panel of Independent Children’s Lawyers, Collaborative Professionals NSW, International Academy of Collaborative Professionals and AEA. Sarah is a regular presenter of continuing legal education in family law. Contact Sarah atsarah.bevan@sbfamilylawyers.com.au or connect via LinkedIn

Alfonso Layson was admitted as a lawyer in New South Wales in 2012 and has been recognised as an Accredited Specialist in Family Law by the Law Society of NSW. Alfonso has been an integral part of Sarah Bevan Family Lawyers for over 6 years and is a Senior Associate at the firm. Alfonso has always practised exclusively in all aspects of family law, including niche areas such as surrogacy law, both domestic and international surrogacy arrangements, adoption, international cases and cases involving complex structures.  He has also been the primary lawyer on many difficult and highly unique cases, including the first Australian decision under the Hague Convention on Child Protection. Contact Alfonso atalfonso.layson@sbfamilylawyers.com.au or connect via LinkedIn

You can also connect with Sarah Bevan Family Lawyers via Facebook